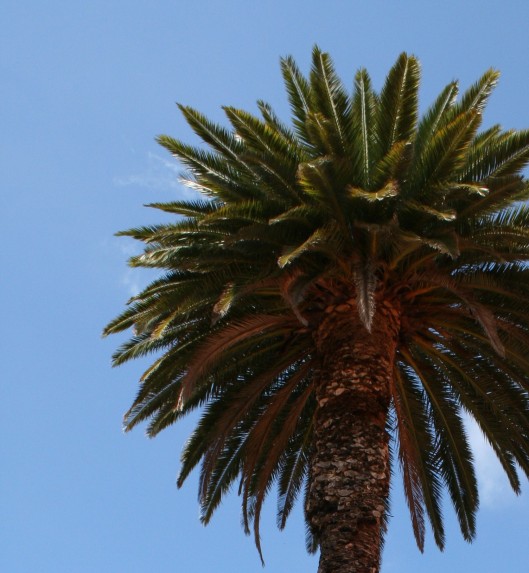 My Canary Palm, when it was healthy last year

This is a sad day for me, as I had to book an appointment with the tree doctor to amputate my beloved Palm Tree. In 5 days time, this wonderful plant will be reduced to a stump having lived and seen some amazing times in Madeira. Two centuries of life will soon come to an end. 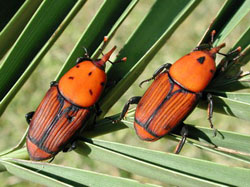 The sad demise of my beautiful Canary Palm that has proudly stood watch over my Quinta for more than 4 times my own life time, has been caused by this beautiful beetle like creature. It only eats from the Canary Palm Tree, settling into mature ones first, and then chewing its way through the centre or crown, destroying all new growth, making nests for new offspring until it eventually kills the tree.

A little known and small fact, that the tree you see in this picture is not actually considered a tree. It is a grass. It has no ‘life’ rings, the trunk is made up of fibres, and becomes very unstable very quickly when it dies. As it has now been declared dead, an expedient removal is imperative as it may not stay standing if left untreated before this winter sets in! 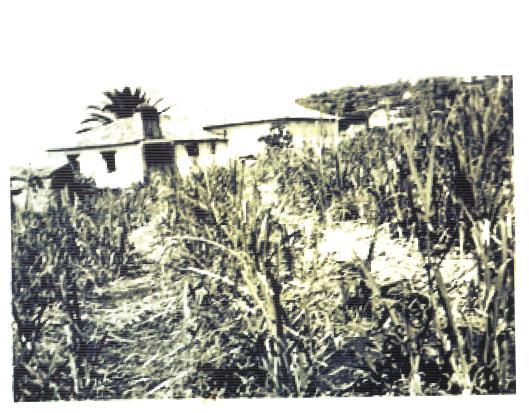 This is the only photo I have, taken of my house over 90 years ago. You can see how high the Palm tree is then, even compensating for the angle taken on lower ground. Note, that the land surrounding MY house is covered in Sugar Cane and not bananas that one can see today. The area from where this photo is taken, now belongs to the neighbour, as parcels of land that belonged to the Quinta were split up and sold off many years ago. My property has had a very interesting past. Once the main Sugar Cane plantation and producer for the ridge I live on, then it became the local village school.

It was also a bootmakers, a village shop and Adult Education Centre, before reverting back to a home, whereby a prominent doctor and his wife lived. After that it gets a bit shady, as the last occupant before me, committed suicide in the house, which left it empty for a number of years and in a derelict state by the time I bought it in 1999. The locals, keep stoom about this part of its history, and it has been very difficult to get any more information on this blip of history concerning the house.

Photo taken around 6 years ago (front of house)

Another picture of the past, taken around 6 years ago….and maybe more if my memory is wrong! The dip pool at the front, which has since been removed, due to its costly efforts to keep it in a fit state, and in the path of falling branches, which create considerable damage when they drop off. Part of the roof has been damaged due to the weight of them, as the Palm is so tall that getting a haircut is a very difficult and expensive procedure!

See how close the tree is to the front of the house!

As you can see from this picture (On the right) how close the tree is to the front of my house. And the track is down for the dip pool (so this was taken at a similar time to the other picture.) And I notice now, how it looks like its leaning the wrong way! Again, you can clearly see the damage to my roof, a blight I have had to live with EVERY winter since 1999! 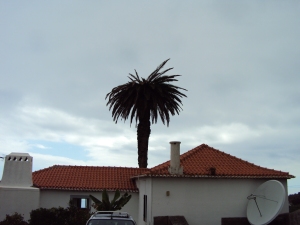 Sad demise as the weevil is clearly killing off my tree

This picture reminds me of how truly sad my tree looks. At this point the Camera (Local Council) sent up a few ‘officials’ to the house and made an assessment of the situation. A few weeks later, a local garden centre turned up on my doorstep and hiked up the tree to take a look. A shower head was then attached to some pipe and tacked to the trunk, whereby they pumped several gallons of poison into the crown to try and eradicate the pests. This carried on every month for a period of 6-7 months at a cost to me of 40 euros a pop, but alas it was too late, my Palm was beyond salvation. The decision was made to stop treatment and the pressure was on by the Camera to have the tree removed.

Just chuck a rope over and hike up the tree!

As the above picture suggests….this chap and his mate, literally threw a rope over the middle of the tree, from being perched on the roof of my house, before this chap scaled up it in his loafers to attach the shower head and hose. Several months after this form of treatment had been deemed ‘doomed’, the next phase was to have all the dead and few ‘live’ leaves removed, a few more treatments of ‘hope’ and an injection into the base to the centre of ‘antibiotic’. 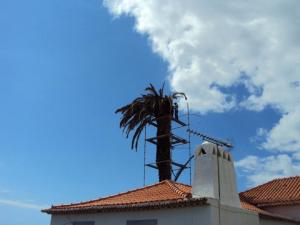 The Garden Centre returned once again, and at a cost of 600 euros, scaffolded the tree and set about removing the branches so that the weevil would not have anything to snack on, and for safety the dead ones wouldn’t fall off and kill me if I happened to be stood under the tree at the same time! My roof got a reprieve this winter too. And I slept soundly all the way through for the first time since I have lived here, safe in the knowledge that I would be dry and not have to listen to the drip plop drip sound, for every time the wind blew, a branch fell off, hit the roof and gave me a new leak to fix. But bloody buggery bollocks and sods law that this last winter was the driest on record and we never even had a thunderstorm! Bloody typical!

The Camera have been writing threatening letters all summer, have sent the forestry commission and the Health and Safety people all to see and inspect the tree, as the neighbours had been complaining about the safety of it. I had to concede in the end and gave my assurances that it would be chopped down by October, well before this next winter would set in. Not shy of letting me get away with keeping it there for a little longer, I received another recorded delivery letter from the Camera with yet another threat over court and I duly paid the garden centre a visit today to book in the impending amputation. So, this is the end of an era for my little Quinta da Palmeira. As of the 17th October, my little totem pole of grass will be hacked up and chopped down. Of course they will now be obliged to redraw their village and island maps as this land mark disappears from the landscape with which it has belonged and grown with for nearly two centuries and I now face the sad theoretical idea of changing the name of my house from Quinta da Palmeira to Quinta nao Palmeira!

I am sitting here and cannot believe how emotional I am getting over a bloody tree. BUT its not JUST a tree! Its a peice of important Madeiran history that belongs to an important historical house in this immediate area of Ponta do Sol, and as the sad amputation of a landmark disappears so does the historical value of the house and the area along with it. As new buildings creep and grow up and around the area and hide the facade of the Ponta do Sol, Madeiran equivalent (on a much smaller scale) of a ‘Downton Abbey’ of Livramento, I find myself wanting to preserve this for as long as I can and I hope that it will do with this blog entry for a few more years to come, when the next 3-10 owners of this abode wants to research its roots. AND now I will shut up!

On another note; which I nearly forgot, the other half of this post was supposed to be dedicated to the word ‘Snicker Doodles’ and Productive Day, AS I now can’t be bothered to ramble on any more as it is really late, I will keep you in suspense and carry that fable on for tomorrow!