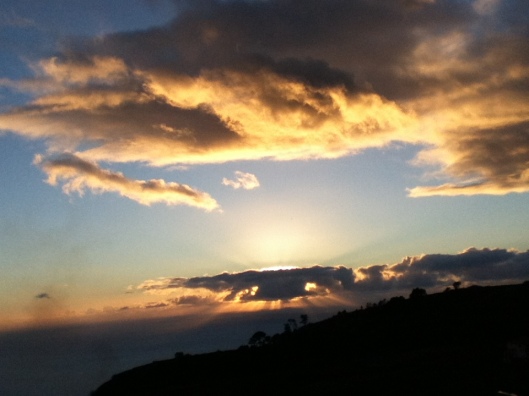 Today was Writers group and our once monthly meet. Surprisingly, as we were reminded today that we have now been meeting for 2 years and are into our third! Where does the time go?

This month, we ventured for the first time since the group has been running, into Funchal and Thelma hosted and made us feel very welcome in her home today. Thelma runs the only International school on the island and although she had had a robbery to deal with today, was so unphased by the nasty occurrence when we met her, of the scene she found when opening for school this morning. I cannot help but admire this woman who deals with all that is thrown at her and remains calm and unhinged by anything….she never comes across in a stressed state and is one of the few women I know that can smile and genuinely do so, whilst the rest of the world has gone to shit!

As this is a new blog and it seems I have some followers now (in shock actually as this is a blog about me and my rather mundane little sad life) that I will try and explain what we do with the writers club which is a part of the M3A (Madeira, University of the Third Age). I must give credit here to Colin and Irena who actually started the bloody thing up and whose fault it is that I am now chairwoman of this growing expat association!

We are made up of a small eclectic group of madames that meet once a month in someone’s home and discuss the homework we have been set the previous month. 3 of us have been in this since its birth and we now have 5 eager ladies with another 2 looking to join the group. Some of us are looking at taking our writing seriously (the original 3) – and the others have approached it as a sanctum for pleasure.

In fact Irena is the first of us all to actually go as far as write and publish her own book! And Annie and I are very happy to have been a part of her process, as we learnt a lot from her journey of writing to self publishing. An enormous effort and eye opener of how to get there and Irena is now going through the laborious process of marketing, which is not as easy as it looks! Her book is a very profound and a thought provoking read, particularly for women and I simply could not put it down, so please support her by having a little look at her website www.primalbirth.co.uk

Annie (the second original writer baby) is working on a bio of a chap she went to Uganda with, who set up the charity ‘Empower a child’. She has also written a children’s book called ‘ Zoes Stripes’ which she illustrated herself, and it is so sweet that all I can think about, is that this will become the next ‘hello kitty’ craze……but she is now concentrating on the bio, so we will have to wait for dear old Zoe a little longer.

Then there is me……facebook thug and now writing my own blog and wasting time by doing so! I have 3 books on the go, and ideas for a TV script and other projects but just can’t seem to finish any of them! It is quite remarkable that this blog has had so many entries in it as it has so far, as I come up with ideas then get bored of them so quickly! But I gave myself a good talking to the other day and I am making the effort to try and write something everyday to get me into the ‘groove’ for writing and that is how this blog became about. I am working on a dating article for a magazine and if it doesn’t get published I will stick it here to bore the pants off of my now new and going to soon be suffering readers!

So back to writers club/group. Each month I set a task and then the following month we meet up and discuss it. It is great fun and really astounding at the various differences and ideas that the group share. Usually I set a ‘key word’ and then we go off and write anything we want. Some words we have had fun with are: Mirror; silence; curtain; to name a few and last months word was ‘RED’ but we decided to up the anti and make it a poem. None of the group had attempted poetry before, so this was a really difficult challenge, but as usual everyone came through and produced some really diverse and brilliant first time poems!

So, as I am not shy and do not want to put this into print, I thought I would share with you my homework. That said, I hate poetry, hate reading it and absolutely do not understand it. I have no idea about structure or what is the ‘done’ thing here, so one can read this and cringe or enjoy it in its crappyness……..I really don’t care, but if you are reading this and fancy joining our little group if you are interested in the written word and composing a few each month yourself, then you will see that we are all amateurs and have fun whilst having a damn good girly gossip once a month and everyone is welcome to come and join us!

Envy, jealousy, rage and hate
Consumed his every thought
Killing her, was not his fate
The act, the slash and now distraught

How could she lie so well?
And he did not believe
She screamed at him to go to hell
And that’s when he felt the reprieve

No one would find her in this place
Among the mould and clod
One last look, he spat in her face
As she laid, looking up toward God